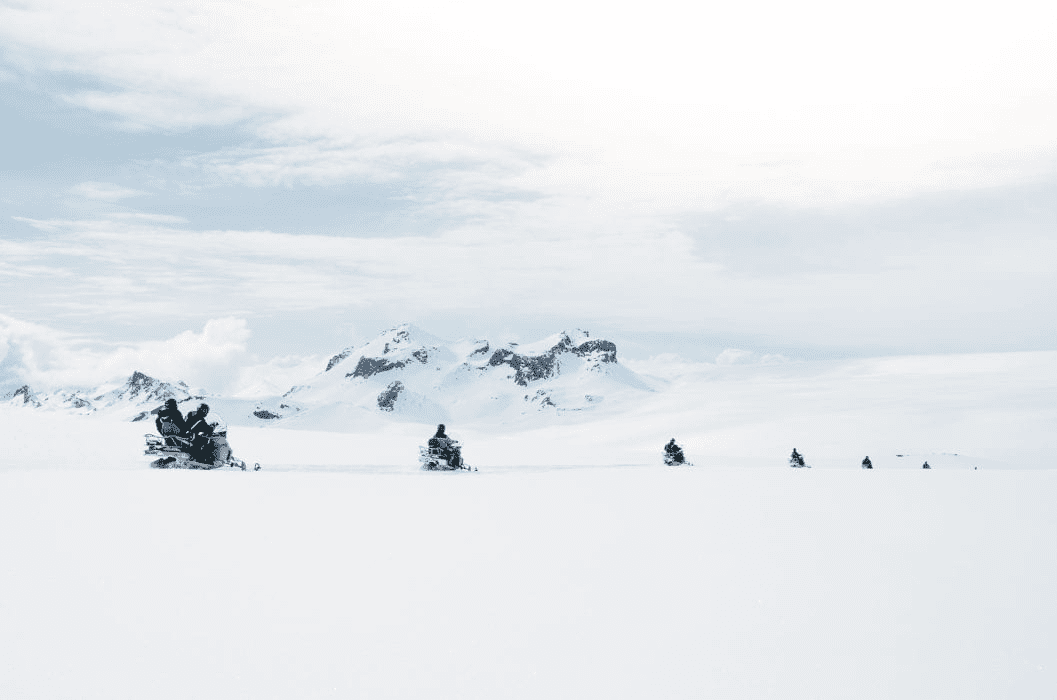 Why Snowmobiling on a Glacier Should be on Your Bucket List

When travelers think of visiting Iceland, the main agenda on the top of their list is an adventure

So, why should you include snowmobiling on a trip to Iceland?

Well, whereas in other countries around the world, tour guides will take you to mountainous terrains and vast snowy tundras, here in Iceland we’re a little different. 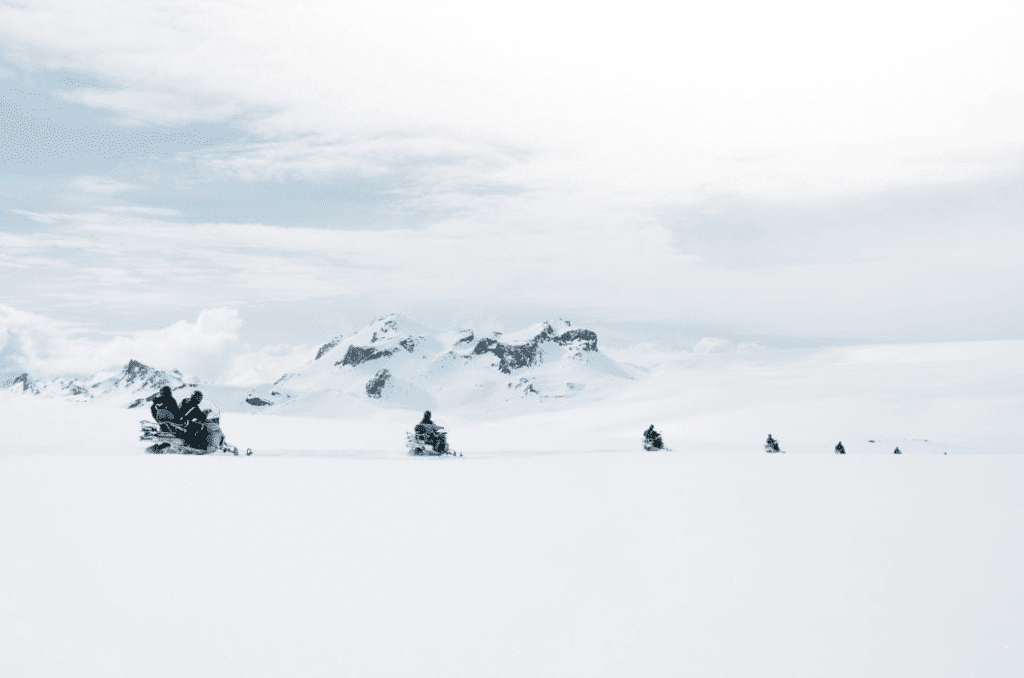 When travelers think of visiting Iceland, the main agenda on the top of their list is an adventure.

After all, Iceland is the land of fire and ice, the land of the midnight sun as well as one of the best places on the planet to watch the incredible Northern Lights.

What more can you expect from an island being continuously stretched in the mid-drift of 2 tectonic plates, sitting on active volcanic grounds as well as being filled with endless waterfalls, glaciers, black sand beaches and mountains? Iceland is simply incredible.

But, when you’re planning a visit, it’s not simply about where to stop and what to grab a picture of. Instead, the ultimate Iceland trip is about the experiences and memories that you take away with you.

In this blog, I’ll explain why snowmobiling on a glacier in Iceland must be on your bucket list, as well as the history and rich geological environment you will encounter rumbling beneath your feet.

A Brief History of Snowmobiling

Snowmobiles are motorized vehicles designed for winter travel and recreation to which can only be operated on snow and ice.

What’s great about them is that they don’t require a road or trail, and can frequently conquer some challenging arctic terrains. Each journey is about carving your own path through these rugged conditions, which is why a snowmobile is so versatile.

In the arctic countries, snowmobiling has even developed into a sport with a series of events, mainly held in the US and Canada. This includes trail racing, hill climbs and oval racing, with each just as adrenaline-pumping as the other. 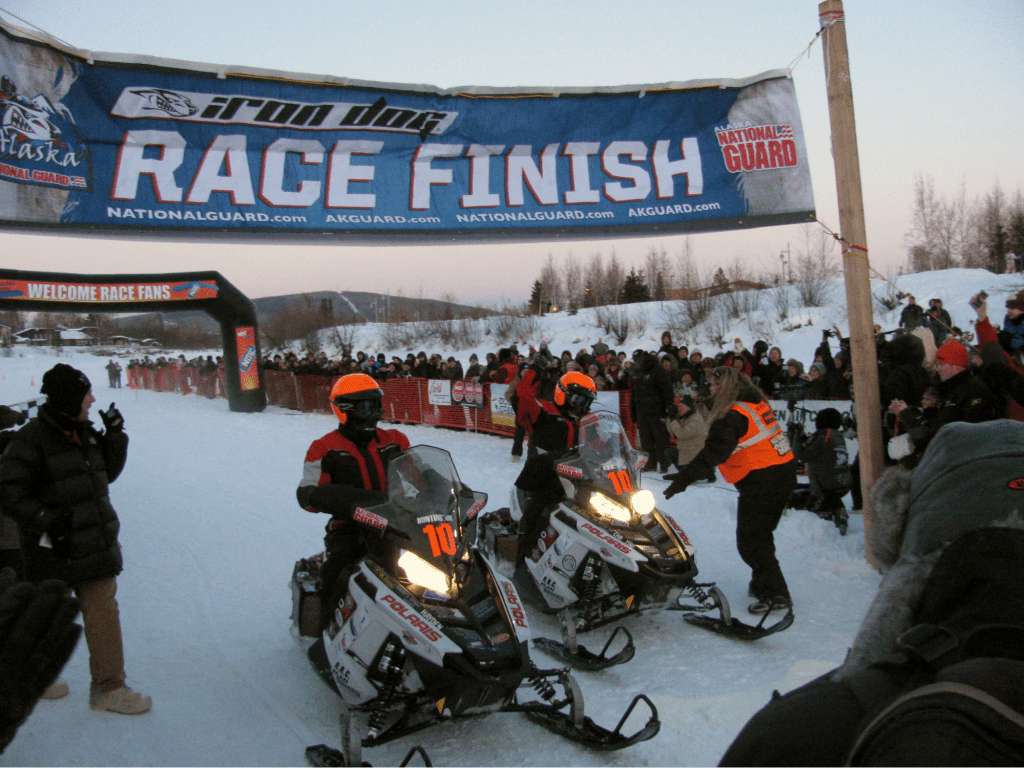 However, for others in more isolated communities (parts of North America), the invention of the snowmobile allowed hunters to expand their hunting grounds with the ability to travel further distances.

Prior to snowmobiles, these hunters would be resigned to only using snow-shoes and dog sledding as key methods of survival in these harsher northern climates. 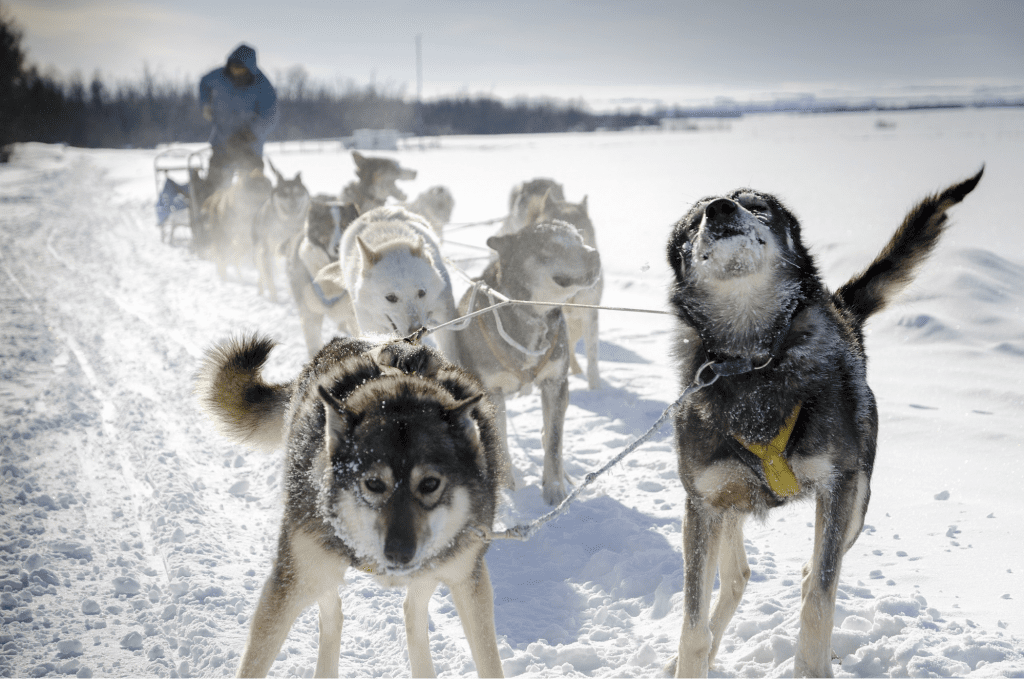 Snowmobiles, however, weren’t actually invented until the 1920’s. Carl Eliason from Sayner, Wisconsin, initially developed the prototype by mounting a two-cylinder motorcycle engine onto a long sled, steering it with skis under the front, and propelled it with a single track.

Eliason went on to build 40 snowmobiles, which he patented in 1927. However, as soon as word caught on, Finland made an order for over 200 vehicles whereby Eliason sold his patent, which eventually ended up in the hands of a Canadian subsidiary of FWD Company of Clintonville.

Nowadays, snowmobiling has become widely popular with travellers across the globe wanting to try this adrenaline-pumping form of transport across the rugged snowy tundras of the northern countries in or near the Arctic Circle.

However, in the harsher extremities of the Arctic Circle, snowmobiles are still used as vital vehicles of survival, to ensure there is enough food gathered for these communities.

Imagine yourself in the midst of an untouched white snowy arctic tundra.

All around you there’s the tips of mountain peaks, snowdrifts and glacial crevasses. In front of you is the start of an adventure, and you have the complete freedom to explore and discover a side to Iceland few get to tread.

Not only is the experience fun, fast, adrenaline-fuelled and unique, but the locations are simply phenomenal. So much so, that you can even see how the snowmobile guides enjoy each and every exploration with their tour groups. No trip is ever the same in this Icelandic environment. 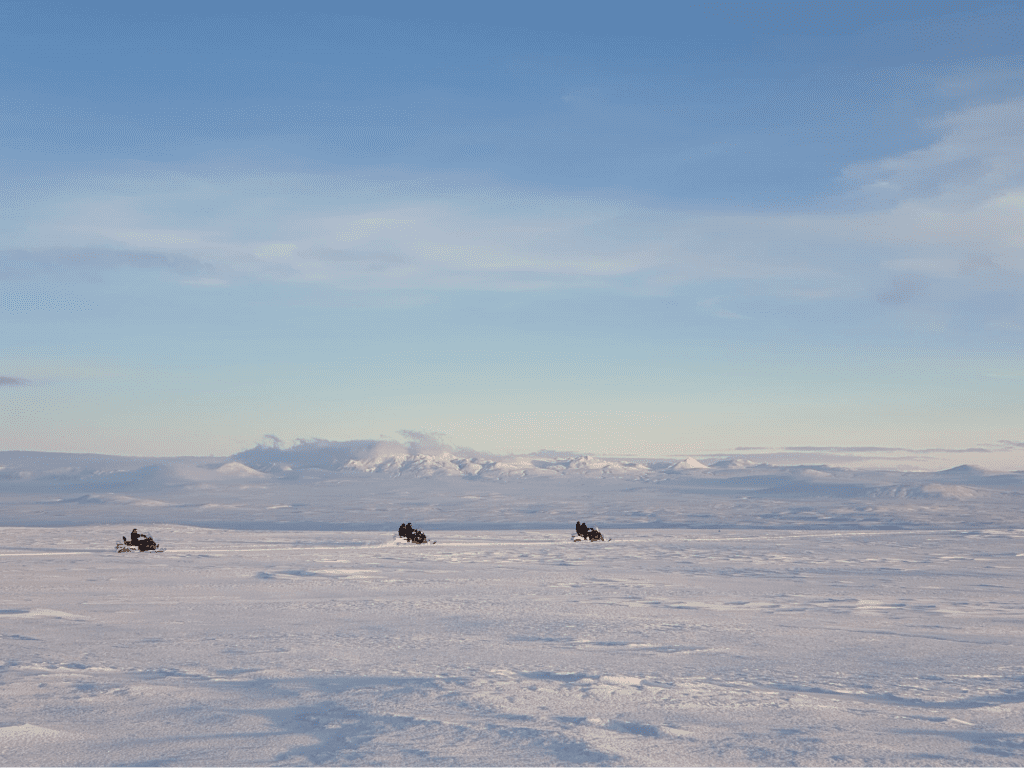 You’re entering nature on a different scale, at a different altitude and completely unique intensity. As soon as you turn on the throttle, it’s simply you and the incredible natural environment which has been newly carved by the evening before. 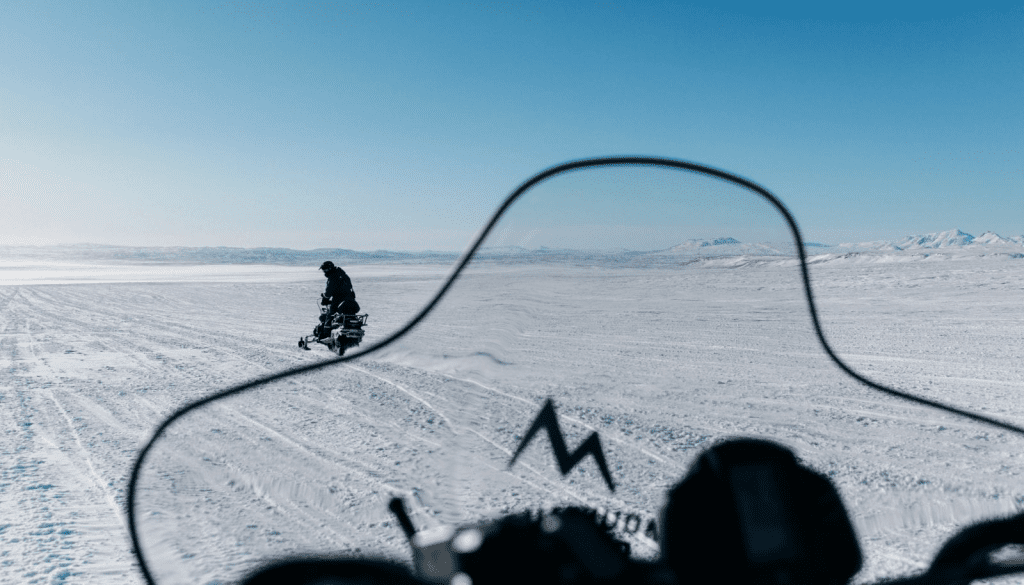 So, why should you include snowmobiling on a trip to Iceland?

Well, whereas in other countries around the world, tour guides will take you to mountainous terrains and vast snowy tundras, here in Iceland we’re a little different.

At Langjökull, you’ll be picked up from the mighty Gullfoss Waterfall at the very tip of the Golden Circle and head out onto the top of a glacier that sits on top of two active volcanic systems and feeds the waterfalls across a huge area. These include the mighty Gullfoss, Hraunfossar and Barnafoss to name a few. 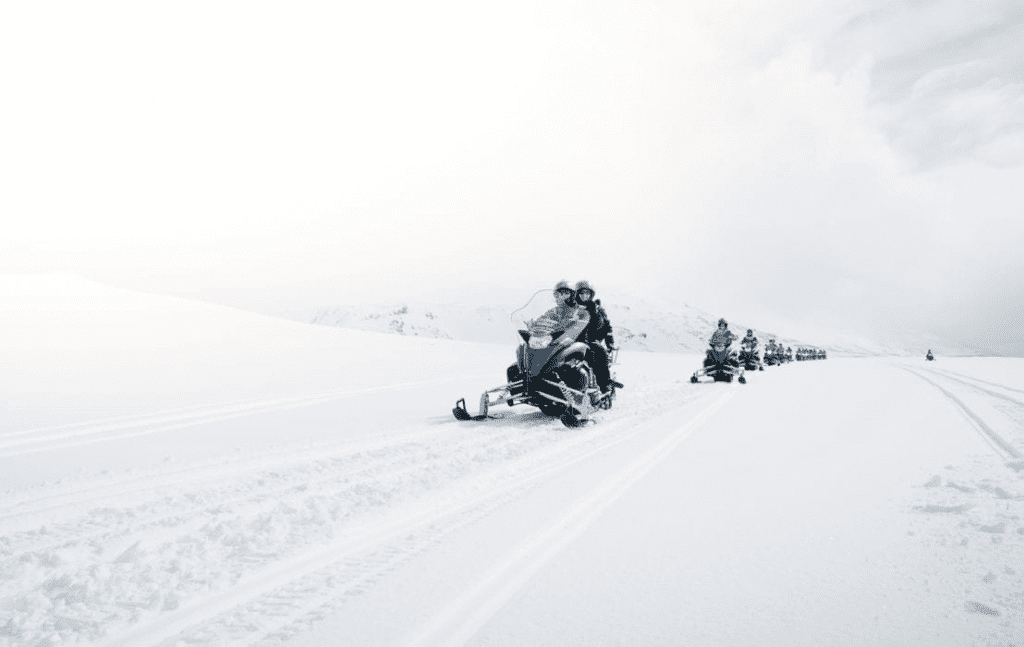 Whereas, at Mýrdalsjökull, you’ll be zooming across the top of one of the highest peaks in Iceland, on top of a glacier that covers Iceland’s largest active volcano, Katla. This is also the best location to visit one of Iceland’s most spectacular natural ice caves all year round.

If ever you wanted to understand why Iceland is called the land of fire and ice, snowmobile on a glacier covering a mighty volcano.

Dare yourself to try out this once in a lifetime opportunity and you won’t regret it. Experiencing the ride, exploring nature and carving your own way across these great white expanses is an activity not to be missed.

All snowmobile tours in Iceland will be chaperoned by professional guides who have extensive experience in a multitude of conditions.

You will always receive a safety briefing at the beginning of every tour as well as a clear explanation of everything from how to drive the snowmobile, to what you should do if you fall off.

At basecamp you will also receive the following snowmobile gear to ensure you are warm and protected in the conditions on top of the mighty creeping glaciers: 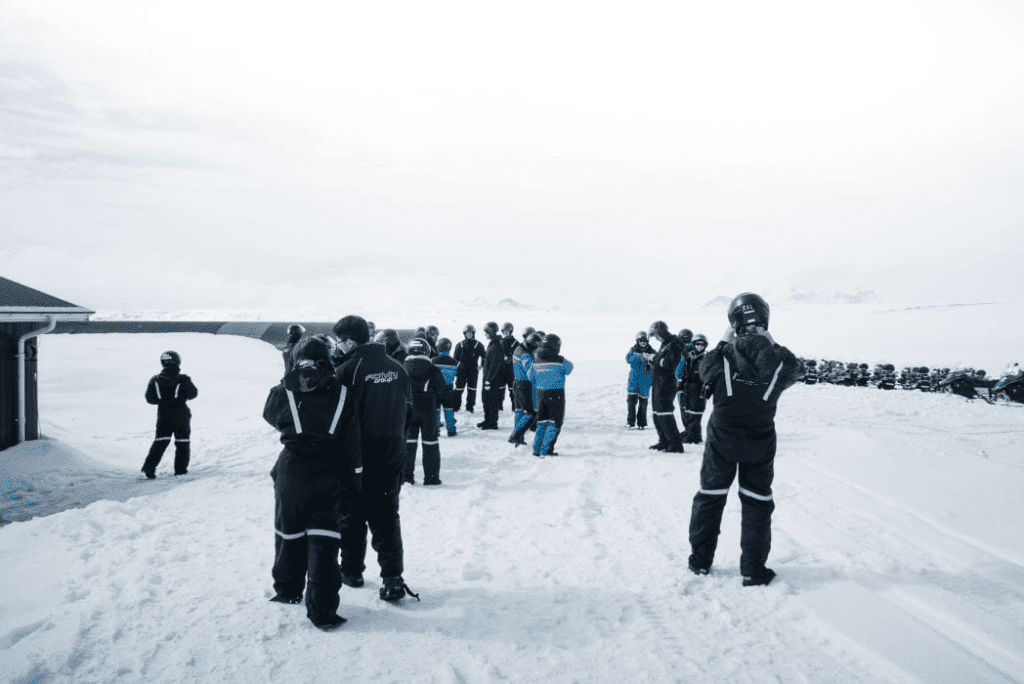 If you have any questions, apprehensions or need any assistance throughout your adventure, don’t hesitate to speak to your guide who will ensure everything is fantastic.

Remember, these guys do this multiple times a day everyday, so you’re very much in safe and good hands while you explore the beautiful tundras of white expanses.

Where Are the Best Places to go Snowmobiling?

This is Iceland, where there’s a glacier or snow, you’ll bet you can find a snowmobile tour.

However, the very best ones are on Langjökull glacier, on the edge of the Golden Circle near Reykjavik.

You can easily add this experience as part of a full day exploring the Golden Circle, or alternatively as part of an Iceland self drive tour or an Iceland holiday package.

Frequently, travelers will opt to dare themselves to take on the ultimate Iceland challenges with a snowmobile tour, much to the envy of their friends back home. 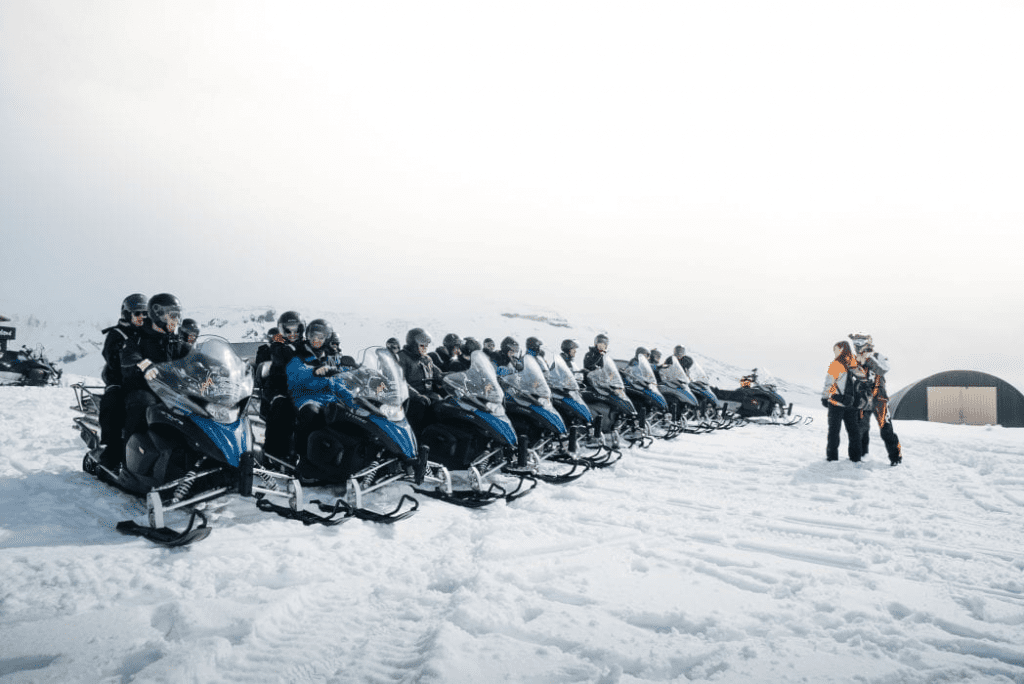 It’s an incredible sensation and the highlight of any trip. Langjökull glacier, in particular, hosts the most dramatic scenery around: mountain peaks, wispy snowdrifts and the most spectacular carved valleys below.

You’ll want to take your time gathering some pictures once your all-terrain monster vehicle gets you to the pinnacle of one of nature’s greatest giants. 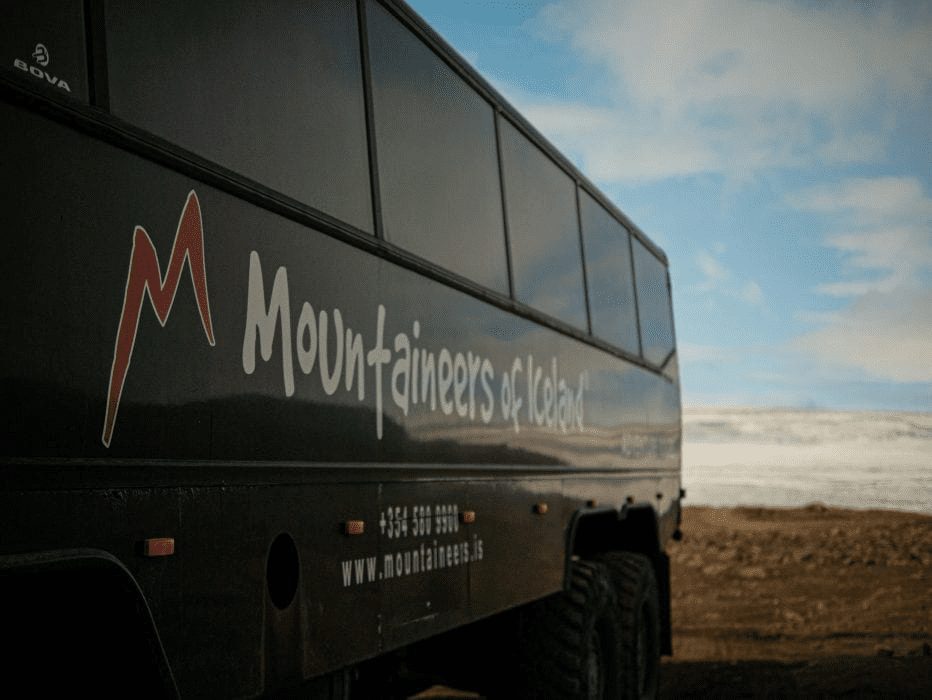 Langjökull is also the second-largest glacier in Iceland. It hosts a staggering 195 km³ volume of ice, is 580m thick and reaches 1450m above sea level at its highest peak which is called Baldjökull.

The glacier itself sits on top of a mass of hyaloclastite mountains, formed by old subglacial eruptions, whose peaks you can find in certain places on top of the glacier. Your snowmobile ride may give you the opportunity of spotting some of these.

But, Iceland isn’t called the land of fire and ice for fun. Langjökull glacier also sits on top of two active volcanic systems. These volcanic systems are so powerful that they even fuel the neighbouring geothermal area of Hveravellir.

Langjökull glacier is also home to one of the world’s most spectacular man-made ice caves. This is the only tour in Iceland that you can combine both snowmobiling and an otherworldly ice cave visit. 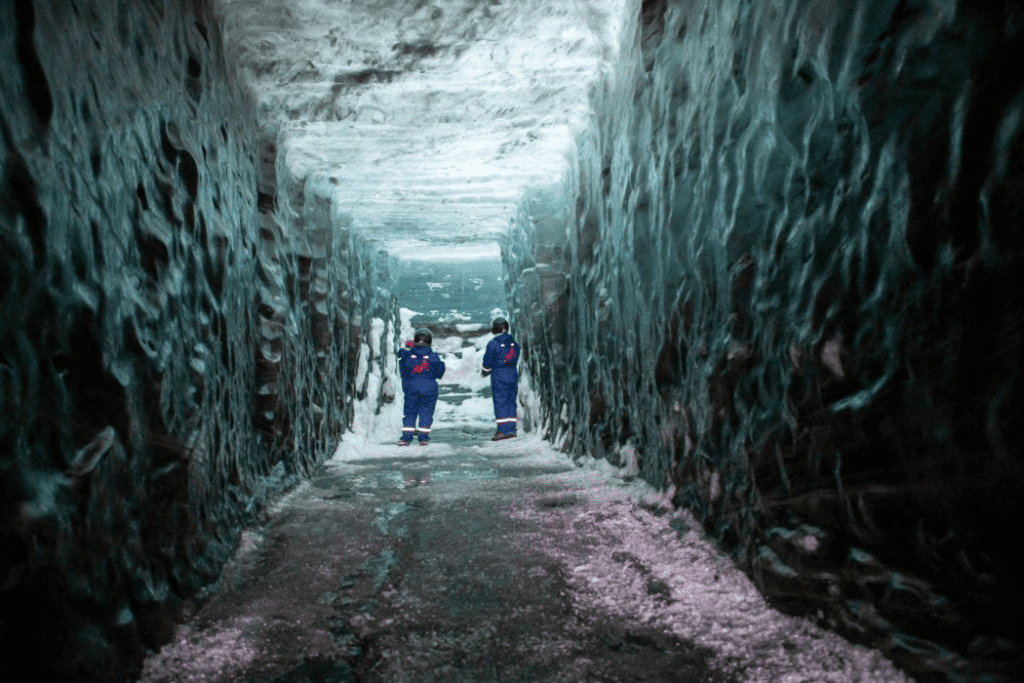 You’ll have plenty of time to explore each and every crossing cavern and cove of this beautiful ice cave.

Decorated with a spectrum of blues, blacks and whites, this otherworldly experience gives you the rare opportunity to explore the bowels of a glacier. Exploring the caverns, capturing snaps of some beautiful ice formations and the purest waters within is one of the most surreal activities you’ll encounter.

Taking a snowmobile tour on top of Langjökull glacier is carving your way through eons of volcanic and geological history, as well as capturing the immense beauty of one of Iceland’s most spectacular creaking giants.

If you’re up for the challenge of a snowmobile tour in Iceland, Langjökull glacier is the place to do it.

How did Langjökull Glacier Form?

All glaciers form as the result of more snow accumulating over the year than melts in the summer period.

As these layers of snow accumulate the further buried snow grains become increasingly tightly packed and are then converted to firn (the stage between snow and glacial ice). This then metamorphoses to glacial ice as the firn recrystallizes.

Langjökull glacier, formed around 3500 years ago. It took centuries of snowfall to form the 400 square kilometres of solid ice it now holds. The glacier, however, was at its largest in 1840, and has since been slowly receding in size.

At present, unfortunately with the rate of climate change, the glacier could well disappear within the next century.

As a result, it’s never been more important that we treat Iceland’s beautiful natural environments with the utmost respect, care and consideration on every trip and tour that we conduct. We also ask our travelers to follow our tour guides instructions to help us keep these environments as incredible for each and every group who has the pleasure of experiencing them.

Snowmobiling is the ultimate bucket list item when visiting Iceland in winter. The sheer freedom of exploration in the midst of a white snowy tundra is a completely unparalleled experience. Taking the opportunity to zoom across one of Iceland’s glaciers on top of the active volcanic systems below is simply an opportunity you cannot get elsewhere in the world.

If snowmobiling wasn’t on your bucket list before, it certainly should be now.

Here is a another great article about snowmobile history from Chaz Wyland.