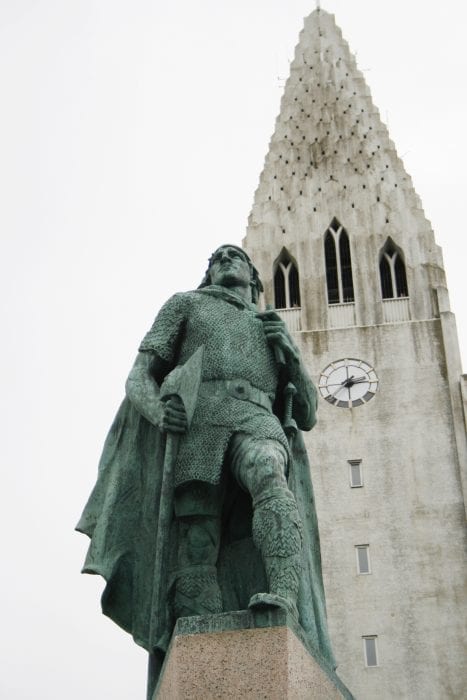 Icelandic colonization of Greenland and (briefly) of America

The colonization of Iceland by Norse settlers and people from the western lands, i.e. Ireland and Scottish islands, took place in the second half of the 9th century. Íslendingabók (Book of Icelanders), written by Ari the wise tells the tale of explorations by a Norse man who set out to sail to Faroe Islands just north of Shetland, overshot it and found Iceland by coincidence.

Iceland was settled in the Viking Age which began with the oldest recorded raid by Norsemen on the British mainland in Lindisfarne 793 A.D. Navigation skills as well as boat building expertise allowed Norsemen to sail across open sea with some assurance of being able to reach back to home base.

By around 1000 A.D. Iceland was more or less fully settled. Vikings were yet not tamed and kept coming over the sea from Norway and Norse settlements in Ireland and Scottish islands. One of the latecomers was Eírikur rauði Þorvaldsson, Eric the red. He had to flee Norway because of manslaughter. Eric built his farm in Eiríksstaðir in western part of Iceland where his wife gave birth to a son, Leifur heppni, Leif the lucky. True to his heritage Eric came into trouble again and killed an adversary. He surveyed a large island east of Iceland and decided to make there a new home.

Eric the red gave the name Greenland to this island, which is in fact the largest in the world and covered with ice cap. Ari the wise gave this explanation:

He gave a name to the land and called it Greenland and said that people would be more eager to go there because the land had a good name.

It seems the killer Eric the red did not fancy himself living alone despite not being the most easy man to get along with.

Two Icelandic settlement in Greenland, Vesturbyggð and Austurbyggð, thrived for some 500 years. Recent archaeological studies suggest that a number of factors resulting in a “contradiction between identity and reality”  lead to the decline of the Icelandic settlements in Greenland. In a non-scientific vocabulary: Icelandic people in Greenland could not sustain themselves due to climate changes as farmers with sheep and cattle, as their custom was, and decided to leave instead of opting for an alien lifestyle.

Leifur the lucky, son of Eric the red, explored the land west of Greenland, later to be known as America. Icelanders probably knew about this land after overshooting Greenland on their way from Iceland. Leifur gave these new found lands three place names that reflect their environment. Helluland, Icelandic for “Stone Slab Land”, possibly Baffin Island; Markland, Icelandic for “Forestland” which could be present day Labrador and finally Vínland, the most southern part of the exploration. Vínland means “Wineland” and thus named due to wild grapes that grew in abundance. There are suggestions that Vínland is the greater New York area.

Leifur did not settle in the land he discovered – as expected by a man with the suffix lucky attached to his name. Icelandic couple, Þorfinnur karlsefni and his wife Guðríður Þorbjarnardóttir, are the first Europeans on record to settle in the Western Hemisphere. Their son Snorri Þorfinnsson would be the first European born on mainland America. Perhaps Þorfinnur and Guðríður tried to make their home in L’Anse aux Meadows in Newfoundland, Canada. That is the oldest known site established by Vikings in North America and the earliest evidence of European settlement in the New World. There are excavated remains of an 11th century settlement consisting of timber-framed turf buildings (skálar) made by Icelandic settlers.

According to the Sagas Þorfinnur and Guðríður and their fellow Icelanders had to abandon their home in North-America after violent clashes with native Americans, which they called Skrælingjar.

Thus came to a close the first European venture to the New World. Some 500 years later a man named Christopher Columbus sailed west and opened the European route to America that changed the world. In his younger days Columbus came to Iceland. One can speculate that he heard old stories about a rich and fertile land in the west from the locals in the country that fostered the first colonizers of America.